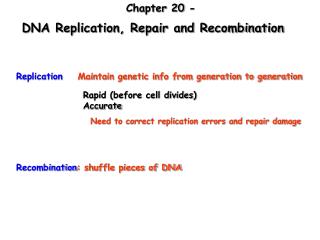 SC.912.L.16.3 - . describe the basic process of dna replication &amp; how it relates to the transmission &amp;

Chapter 6: DNA Replication and Telomere Maintenance - . it has not escaped our notice that the specific pairing we have

Replicación del DNA - . el replicón. replicon (replicón) . it is a unit of the genome in which dna is replicated .

Expression and Replication of the Viral Genome in Eukaryotic Cells: The DNA Viruses - . (how do dna viruses express their

DNA, RNA and DNA Replication - . what is deoxyribonucleic acid?. it controls the activities of the cell. found in the