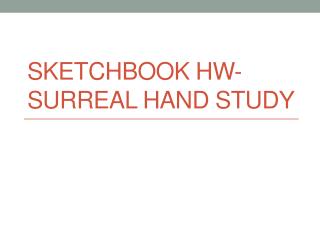 Sketchbook HW- SURREAL Hand Study. Project Goal. Create a drawing composition of a realistic hand rendered in grayscale with drawing pencils. There must be a creative or surreal component to the artwork. Your composition must include as much of one hand as possible. What is Surrealism?. SKETCHBOOK - . as you come in: draw a map of your body and name each body part based on your favorite function on your

Sketchbook Prompts - Keep sketchbooks neat and clean. use front and back of page. must be complete full page sketches.

The Sketchbook - . sketchbook structure. research and investigation. you must read, sketch, take notes. how will you know

The SKETCHBOOK - . the sketchbook is an important part of the design process. but why a sketchbook?. to:. brainstorm

Surreal ART - Surrealist art: 1910-1920’s. focused on the subconscious, the automatic techniques that occur without

SURREAL SHIRTS - Since its inception in 2018, store trek 44 has continued to stay true to the vision of being a place for

Surreal Drawing - . what’s so strange about the following images?. frida khalo. criteria for this project:. must bring

Do Now: Please hand in your HW - Aim: how did jews respond to discrimination and the holocaust? title: recounting stories