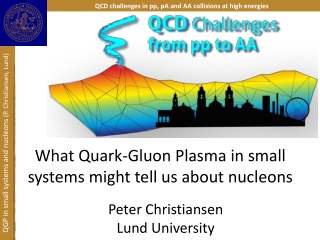 What Quark-Gluon Plasma in small systems might tell us about nucleons. Peter Christiansen Lund University. Go outside of the comfort zone Try to give a microscopic picture for Perfect liquid degrees of freedom Why and how it expands P hase transition condition Hadronization

Quark - Gluon Plasma ! ? - . if physicists are able to create a qgp it will expand and decay into hadrons and will

Connecting the Lattice Points: What Lattice QCD can tell us about the Quark Gluon Plasma - . what experiment can tell us

Probing the Quark Gluon Plasma - . what sort of plasma is a qgp? rhic and its experiments collective flow transmission of

Quark-Gluon Plasma An Overview - . ewha women’s university seoul, april 21, 2005. thank you for the invitation to

Signals of Quark-Gluon Plasma production - . j. magnin cbpf. outline. basics: what the qgp is ? the

The “Extra Strong” Quark Gluon Plasma - . outline. what is nuclear physics? from rutherford to qcd what is a qgp? the