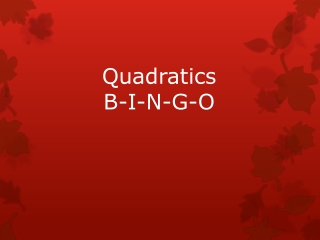 Quadratics B-I-N-G-O. Directions. Each student will fill out a BINGO card with the following ordered pairs in any block without repeating. To play, a question will be displayed. Each student will work out the problem on paper or on a white board.

B O N D I N G - . what is a chemical bond?. why do elements bond? to become stable. bonds form between atoms in

D i n g o - . by lara.o’neill. habitat. the dingo lives in burrows, or holes already there in the ground. appearance.

b e c o m i n g a - . certified public accountant. what are the stereotypes of accountants?. shredding is their #1 hobby!