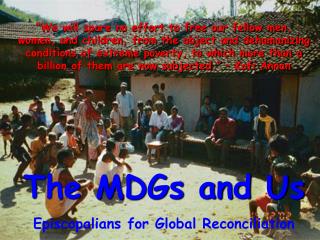 “We will spare no effort to free our fellow men, women, and children, from the abject and dehumanizing conditions of extreme poverty, to which more than a billion of them are now subjected.” – Kofi Annan The MDGs and Us Episcopalians for Global Reconciliation

MILLENNIUM DEVELOPMENT GOALS - . year 12 health and human development. what are the

Millennium Development Goals (MDGs) - . presentation to the mdgr technical committee june 12, 2002- beirut. what are the

M - TRANSACTIONS FOR ENHANCING MDGs AT BOTTOM OF THE PYRAMID A Case Study for m-Banking in Kenya - . francis wambalaba

ICT for Development Experiences from the field Joost Lieshout – Co-Capacity - Cdi seminar – may 18, 2011.

Reaching the Millennium Development Goals (MDGs) - . an overview of the current process and its implications for unesco

A Global Partnership to promote equity and accelerate progress towards MDGs - Education for rural people (erp). a global