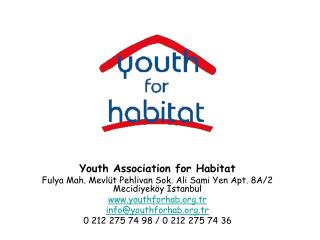 Habitat Fragmentation - . sometimes habitat is not lost nor converted, it is simply fragmented fragmentation has 2

DOUBLE WING YOUTH PASSING PACKAGE - . why have a passing game in the dw? run game gets stuffed loosen up run pressure

Building Effective Youth Councils: Why and How to Do It - . prepared by the forum for youth investment december 2007.

All About Fiddler Crabs and their Habitat - . today we are going to learn about: the fiddler crab, their characteristics,

ABORTIONS - IN THE YOUTH - . the problem of unsafe abortions. each year over 50 million women who experience an

Anthem for Doomed Youth - . wilfred owen. do now: your generation. a) provide 2-3 aspects of society today that will