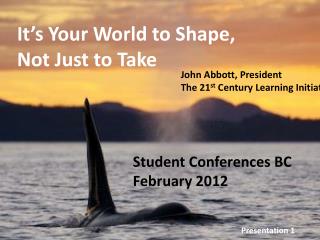 It’s Your World to Shape, Not Just to Take. John Abbott, President The 21 st Century Learning Initiative. Student Conferences BC February 2012. Presentation 1. A. STUDENT LED CONFERENCES - . and creating a vision for increased student performance. at the conclusion of this workshop

Student-Led Conferences - . what is a student-led conference?. a portfolio of work to document what you have

Student Led Conferences - . abby williams. cover letter. this year in science we have learned many things like cells, dna

Student-led Conferences - . by: an 8 th grade student. i am always well organized and come to class with all my

STUDENT LED CONFERENCES - . and creating a vision for increased student performance. at the conclusion of this workshop

STUDENT LED CONFERENCES - . what have you found challenging about science this

Student-Led Conferences - . a presentation for students and parents. student-led conferences. a closer look….