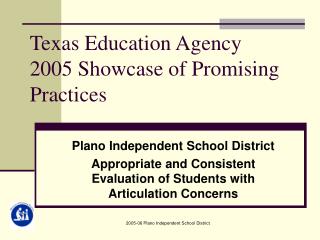 Texas Education Agency - The information on the following slides is from 19 tac chapter 89, adaptations for special

Promising Practices - . para-vet allied to the veterinary profession . paraveterinary workers  are those people who

Promising Practices - . part i. part 1 - history. mission philosophy-please read on page 4 what are the key elements of