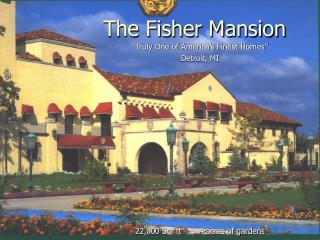 The Racoviţa Mansion - . the racoviţa mansion was built in 1806. it dominates the arge ş plateau b y his extravagant

Whispering Mansion - Note: click the action buttons only! have fun

Amarin Mansion - . it is located in soi arunamarin 39, arunamarin rd. only 10 – 15 minute walk to siriraj hospital.

The Haunted Growl Mansion - . play. skip tutorial. !!!!!. simon growl has left his mansion for a holiday on music island

Gatsby’s Mansion - . gatsby’s mansion. “a factual imitation of some hotel de ville in normandy, with a tower on one

The Pacific Fisher - . by: tori. what fishers eat. snow hares rabbits birds insects nuts berries do not eat fish. how

Welcome To Curtis's Mansion - . b eagles . my work. this years work. thanks for