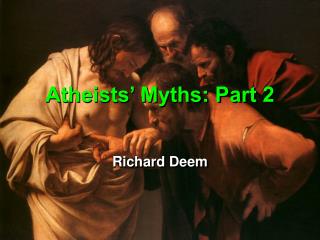 Proving The Existence of God To Atheists - . as the culture moves towards secularism and atheism, more people are

Christians should be atheists - . avenue vineyard january 6, 2008. jan. 6 - celebration of epiphany. this celebration is

Answering The New Atheists - Angry about someone they don’t believe exists!. answering the new atheists. “religion

How Atheists Can Be Effective Evangelists A guide to public rabble-rousing - . outline. why bother evangelizing? when to

Stepping into a Moral Matrix ‘other than MY own’ Atheists/Agnostics/Non-Theists - . a fieldtrip experience by: marla

Inter-f a i theism : Why Atheists Should be Involved in Inter-faith Dialogue - . when asked to respond to “this group

Arguments of Atheists - . most scientists, highly intelligent, or highly educated people do not believe in god problems

The New Atheists - . who are they?. the principal players:. christopher hitchens. richard dawkins. sam harris. daniel

Apologetics: Proving The Existence of God To Atheists - . presented by eric douma. the new