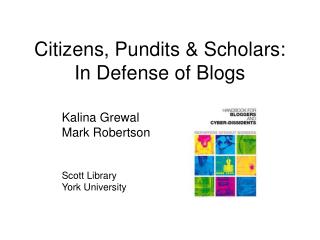 Citizens, Pundits & Scholars: In Defense of Blogs Kalina Grewal Mark Robertson Scott Library York University Overview What is a blog? A global phenomenon Why read blogs? Blogs and the academy Blogs and the library Discussion Blogs? What are they? Definitions

Wanted—A “Just Right” Government - . the ancient romans :. developed the “ rule of law ” common to all citizens

Practice - . you are interested in how citizens of the us feel about the president. you asked 8 people to rate the

Warm Up - . what is your moral code? what values do you think it is important to live by?. the middle ages aka the dark

Rights, Duties, and Responsibilities of a Citizen - . chapter 3.2. in this lesson, we will:. describe the rights of

Don’t drop out… Drop in ! - . creating a university environment that supports the holistic growth of students and

The International Context - The worst global crisis since the 1930’s, has led to drastic increases in deficits and in

Citizens tend to grade their local schools higher than they grade the nation’s schools - . t. the concept that