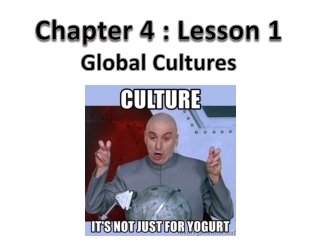 Chapter 4 : Lesson 1 Global Cultures. Essential Question. What are the elements of culture?. Culture : the way of life of a group of people who share similar beliefs and customs. 1 st Element of Culture: Language Through language, people communicate information