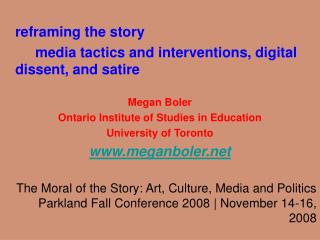 DIGITAL MEDIA PROJECT ‘The Story of Me’ - . shumela ahmed. ‘the story of me’. reaching out to mature students.

Dissent and Discontent - . 13-4. beatnicks. beatniks – writers and artists that refuse to conform they rejected the

Dissent and Discontent - . what lies beneath the prosperity?. many people were critical of the 1950s lifestyle although

Satire and the Like - . irony,satire and such. “a taste for irony has kept more hearts from breaking than a sense of

Framing and Reframing - . putting it all together: thinking, listening, collaborating by : cynthia summers. http://

The Hour and the Story: Metaphorical Interventions in Changework - . bill o’hanlon. hour and the story nicabm 2009. for

The Peasants Revolt, Dissent and War - . “after this said commons went to many places, and raised all the folk, some

Satire and Parody - . things you already laugh at but now have to define in a way which will take the fun out of them.