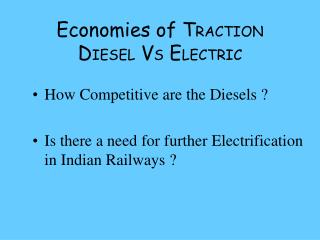 Economies of T RACTION D IESEL V S E LECTRIC - How competitive are the diesels ? is there a need for further

V A T D Y E S - . vat dyes are one of the important class in the synthetic dyes produced. these dyes are characterised by

A d j e c t i v e s - . what is an adjective ?. adjectives are words that describe or modify another person or thing in