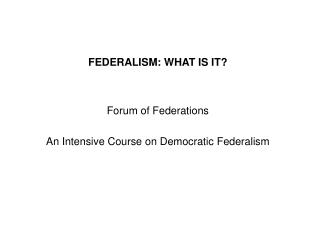 Federalism - . historically, there’s been a shift from “dual federalism” to “cooperative federalism” 1. dual

Federal and Unitary Systems of Government - . a2 comparative government and politics taylor carey. aims. to compare and

Jefferson to Jackson - History 201 – early american history. jefferson to jackson. themes in us history in the era.

Federalism - 0. federalism. focus of lecture. to explain the way nations order relations between central, state, and

US/VA Government: Spring 2009 - . chapter 4: federalism . objectives. the division of powers between the national

Civics and Economics Review Questions Mrs. A. LeRoux - . what are the four fundamental political principles that have

Federalism or The Optimum Size and Shape of Governments with an Application to Crime - . alexander tabarrok department of