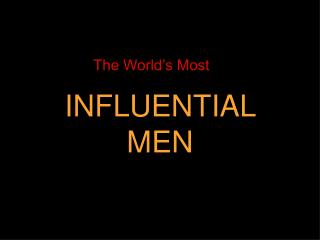 INFLUENTIAL MEN . The World’s Most. To the world you may be one person, but to one person you may be the world. ethiopia - marie swartz . Father & child holding hands Red Cross Hospital, South Africa johannesburg, south africa - george hallett.

Influential Psychologists - . psychologists who have had a major impact on who we approach psychology. wilhelm wundt.

Influential backgrounds - . do our backgrounds decide our success and “education” in college? study conducted by

Influential Person Requirements - . this powerpoint is an example of the requirements for the influential person

The Most Influential People - . by: dyjai heyward. my mother. my mother is a very influential person in my life. she is