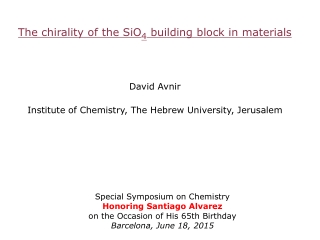 The chirality of the SiO 4 building block in materials David Avnir Institute of Chemistry, The Hebrew University, Jerusalem. Special Symposium on Chemistry Honoring Santiago Alvarez on the Occasion of His 65th Birthday Barcelona, June 18, 2015. By Andrea Carter, Vocalist: Jaimsy Kennedy.

The Origin of Chirality - . anne-catherine bédard charette group meeting jan 25 th 2012. “ any man who, upon looking

The Chirality of Shells - . each of the shells has either right- or left-handed chirality. identify which shells belong

The Building Block of Our Profession - . a message from the president, “the future of the right of way profession lies

Limits: The Building Block of Calculus - . steps to finding a limit limits approaching a value one-sided limits limits at

25G The Building Block of Ethernet Future - Every so often, we witness a major shift in the networking industry that

Chirality in Architecture - . david avnir institute of chemistry the hebrew university of jerusalem in collaboration with

Chirality - . chirality - the handedness of molecules. isomers. we concentrate on enantiomers and diastereomers.

Chirality - . stereoisomers : isomers with the same connectivity between atoms but have a different arrangement of atoms.

Chapter 15 Chirality: The Handedness of Molecules - . isomers. types of isomers in this chapter we study enantiomers

Basic Chemistry - . general biology. matter – atoms and elements. living and nonliving things are all made up of matter