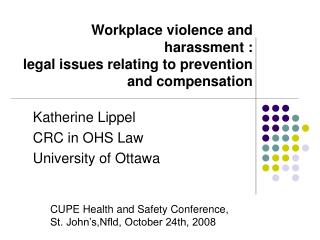 Bed Bugs &amp; Other Annoying Issues in the Workplace - . the material provided herein is for informational purposes

Workplace Harassment - . what supervisors need to know. session objectives. you will be able to: understand the

Workplace Violence: What To Know What To Do - . william mcpeck director employee health and safety maine state