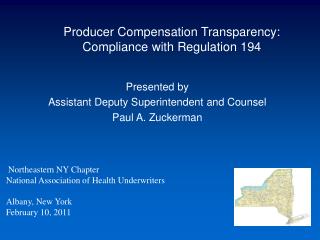 COMPENSATION - . compensation: an overview. compensation - total of all rewards provided employees in return for services

Employment Regulation in the Workplace: Basic Compliance for Managers by Robinson, Franklin, and Wayland - . chapter 1

Contents - . brief overview of the commission legislative amendments: changes to the rules and regulations practice

Promoting compliance – the “other side of control” - . effectiveness of preventive measures to reach regulatory

COMPENSATION SYSTEM - . what is compensation?. employee compensation is the process of paying and rewarding people for

Tom Terry JPMorgan Compensation and Benefit Strategies April 15, 2008 - . pensions in the us how are pension plans

Progression of Title III Programs Through Implementation, Regulation and Compliance - . president’s round table