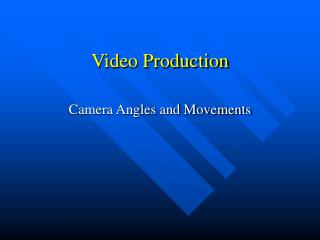 Video Production - Mediajuice studios provides video production in a new way with best ever technology. they give a new

Video Production - . film aesthetics i photography. the cinematographer, the shots, the angles, lighting and colour

VIDEO PRODUCTION - . by the amazingly amazing adrian lowery!. the first pinhole camera was created alhazen in the 1500s.

Video Production - It requires just a little wise effort to convert good marketing ideas into a great one. here at

Video Production - . 2010-2011. each student will have the opportunity to work in each of these areas: work experience 4

Video Production - Https://alexkinter.com/ alex is an american video director, whose services enable your business to