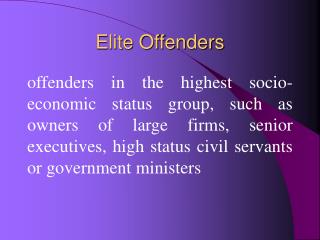 Juvenile Sex Offenders - . presented by chris miley m.s.s.a., lsw. i can tell who is a child molester just by looking at

Elite athletes - . michael phelps. michael fred phelps was born in baltimore, maryland, on the 30th of june in 1985.

Female Offenders - . each group of special needs offenders has its unique problems. and there are unique challenges

Sentencing Aboriginal Offenders - . by: alanah and leah. aboriginal australians tend to have higher arrest rates and

Young offenders Act - . monica abuodha. describe the issue and the history of the

5. YOUNG OFFENDERS - . assess the effectiveness of the criminal justice system when dealing with young offenders. explain

Elite Running - . responses to questions. the controller explains the $3 million reversal of the inventory write-down in