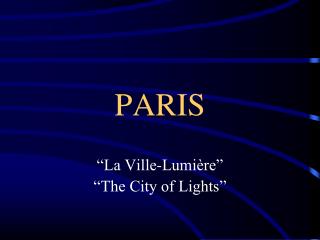 PARIS. “La Ville- Lumière” “The City of Lights”. History of Paris. Founded on a small island by the Parisii tribe Paris is the largest city of continental Europe and is the capital of France, over 2,000 years old. Is divided into 20 “arrondissements” or districts Paris - . by natalie farina. paris is none for there art. croissants. there are a lot of croissants in pairs. places to

Paris - . presented by: austin gold project 6: planning your dream vacation 3/12/10. climate. in paris during the spring

Paris !!! - . by dominique wheeler. paris foods . mailto:bill@parisfoods.com. this is some pictures and information on

 Paris  - . by rebecca aindow . facts and pictures. paris is the capital of france. disney land is located