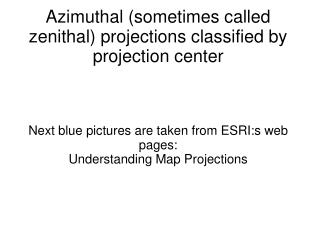 Azimuthal Anisotropy and the QGP - . yasuo miake, univ. of tsukuba. why i iike azimuthal anisotropy tsukuba strategy for

Chapter 1: The World of Geography - . chapter 1: what is geography? * it is the study of our earth; our home. or

7.7 Fischer Projections - . purpose of fischer projections is to show configuration at chirality center without necessity

Geodesy and Map Projections - . what is a map projection?. it is how we represent a three dimensional earth on a flat

Geography and the Wonderful World of Maps and Map Projections - . why do we need differe nt types of maps?. a map

Map Projections and How they are Made - . cartography. additional study. map projections:

PROJECTIONS - . 11.2. def: a projection is a representation of a three-dimensional shape on a two-dimensional surface.

Bone Markings - . -bone markings can be classified as either a depression, a projection that helps forms joints