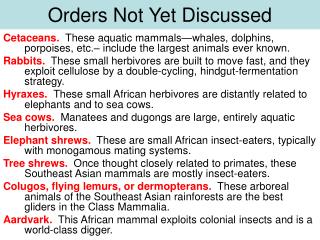 Orders Not Yet Discussed Orders Not Yet Discussed. Cetaceans. These aquatic mammals—whales, dolphins, porpoises, etc.– include the largest animals ever known. Rabbits. These small herbivores are built to move fast, and they exploit cellulose by a double-cycling, hindgut-fermentation strategy.

Orders Not Yet Discussed

Introduction to Order Entry - . order entry lesson 2. following completion of this lesson you will be able to: .

Entity - Relationship Modelling Exercises by Artem Chebotko - . exercise 1. draw an er diagram and translate it to the

i Robot - Fighting our own technology. i robot. by ryan voland. the three laws. law i: a robot may not injure a human

Growth Curve Models - . thanks due to betsy mccoach david a. kenny august 26, 2011. overview. introduction estimation of

Order Sets and Nursing Orders - . order entry lesson 3. following completion of this lesson you will be able to: .

Cultural Competence - Culture defines who we are “a unified set of values, ideas, beliefs, and standards of behavior