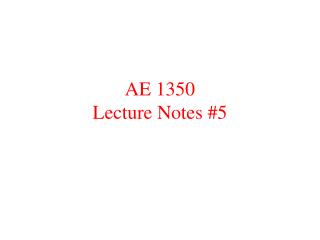 AE 1350 Lecture Notes #10 - . topics to be studied. take-off and landing performance there is considerable variations due

AE 1350 - . lecture #14 introduction to astronautics. astronautics is a broad field. it includes a study of payload

AE 1350 - . lecture notes #12. topics to be studied. importance of structural weight and integrity development of