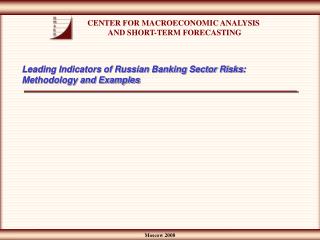 Leading Indicators of Russian Banking Sector Risks : Methodology and Examples. The Objectives of Research. to estimate probability of banking turmoil till 2012 to identify risks in different scenarios. Methodology and Tools. Medium-term econometric model of national economy . LEGAL &amp; REGULATORY ASPECTS OF BANKING A &amp; B jaiib - . 01..day to day banking involves a number of

Money, Banking and the Financial Sector - . chapter 13. laugher curve . a central banker walks into a pizzeria to order

The Russian Avant-garde: Experiments in Abstraction - . purpose. when the new century came, the quest for national

Russian Revolution - . warm up -examine the photo and answer the following questions. objective: tlwbat to analyze how

Structures Consists of service enabler and service delivery parts - Base. base offers. wholesale. refinement of base

1. Understanding potential dangers, risks, hazards and accidents - . what do you think a hazard is?. hazards . hazard is