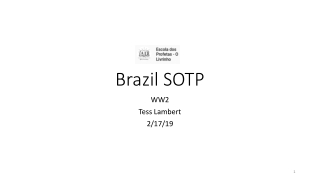 Brazil - . by, paige, aaron, kayla, benjamin. the temperature is always warm. for transportation they use airplanes and

Brazil - . by: vasti sanchez . why would i vacation in brazil ?. my best friend is half brazilian. i would love to see

brazil - . by : jasmine balubar, eduardo laddaran. about brazil. population- as of 2010 it is 190million. population of

Brazil - . tyler, john, bob, janice. religion of brazil. brazil has no official religion, but roman catholicism is the

Brazil - . why here?. facts . covers about half of south america and is the continent's largest nation. divided into the

Brazil - . by: rayni haugen and mackenzie joos . . brazilian animals. manatee- can be found in the freshwaters of the

Brazil - . jacob mcdowell. intro. brazil has a coastline of over 4655 miles it is a country in south america the fifth