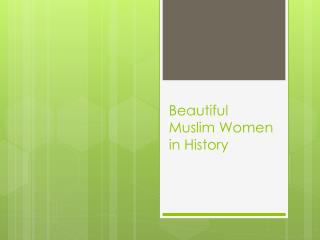 WOMEN IN HISTORY - . by: erica shimboff third grade presentation. the beginning. there was a time in history when women

Women In History - . 2 nd grade spring 2010. jane goodall. jane goodall will be remembered for her discoveries about

Women in the history - . by 曲兆晖. throughout the gallery of patriarchal （父权制） society history, men always

Women in World History - . foundations through the present. early civilizations. gender roles were redefined with the

Women in American History - . pioneers and reformers. some of the ladies. annie oakley: was known as the “best shot

Women in Israeli History - . status of women in israel roots in zionism. two trends: zionism was essentially a masculine