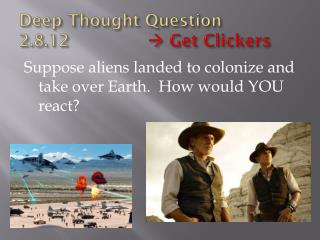 Deep Thought Question 2.8.12  Get Clickers. Suppose aliens landed to colonize and take over Earth. How would YOU react?. Random Fact of the Day. The lion used in the original MGM movie logo killed its trainer and two assistants the day after the logo was filmed. Announcements. Deep Thought - . i love going down to the elementary school, watching all the kids jump and shout, but they don’t know

Thought for the day: - . there is only one boss. the customer. and they can fire everybody in the company from the

Review - . review. we will spend up to 30 minutes reviewing exam 1 k now how your answers were graded. know how to