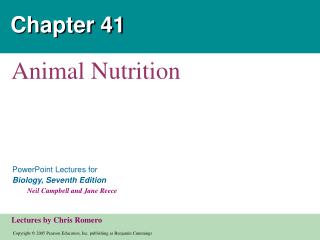 Chapter 41. Animal Nutrition. Overview: The Need to Feed. Every mealtime is a reminder that we are heterotrophs dependent on a regular supply of food. Figure 41.1. Dietary Categories of Animals. In general, animals fall into one of three dietary categories