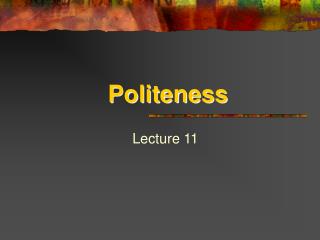 Politeness - . politeness class five. last class talking about our families using the present tense for events that are:

Politeness - . starter – how might politeness be connected to english language and literature?. learning objective –

linguisic politeness - Language and society, language use and language

POLITENESS STRATEGIES: - . taken from: brown and levinson (1987: 91-227) politeness: some universals in language

Politeness in Discussions - You're not listening to me... i said.... if i could just come in here sorry, but … wait a

Politeness and deference - . polite behaviour is the way that we could achieve our goals demonstrating people our good

Politeness in Language - . by : emma , leo &amp; oskari 9b. the definition of