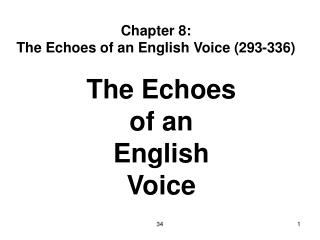 English 7-Chapter 8 - . revising wordy sentences exercise 10. 1. 1. our science class has been learning about the

THE MAKING OF AN ENGLISH TEACHER - . shri . s. selvaraj d irector ziet mysore. a question?. what does “making ”

Passive Voice in English - . the passive voice is used in english to bring emphasis to the part of the sentence that

Chapter 8 An Age of Reform - . chapter focus question: how did reformers and writers inspire change and spark

Echoes of the Past: Life in Tenements - . by samuel barney. introduction. to help you feel for the pain people went

ENGLISH 8 - . kim's game. warm up. set the scene. look at the pictures and give the names of these places. pre reading.

Chapter 5: Use an Appropriate Voice - . by: alyssa, amber, damion and kenzi. 4 keys to an appropriate voice. 1) know your

English 8 - . exam review. how to study. study your notes use the “practice” sentences and any returned tests/quizzes

Chapter Intro-page 336 - . what you’ll learn. you will evaluate the importance of plant and animal breeding to humans.