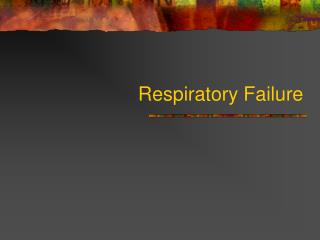 Respiratory failure - . the lung is the organ who responsible of providing oxygen to the body , through inspiration and

RESPIRATORY FAILURE - . nathir obeidat university of jordan. definitions hypoxemia is reduction in the oxygen content in

Respiratory failure - . is the failure of pulmonary gas exchange to maintain the normal arterial o2 and co2 level. it is