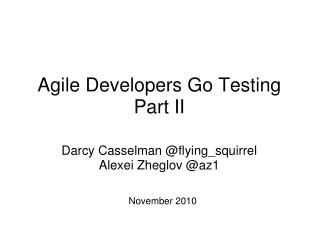 Agile Developers Go Testing Part II. Darcy Casselman @ flying_squirrel Alexei Zheglov @az1. November 2010. What are we talking about today?. A lot of things… They may seem disconnected, but they all: improve software quality involve testing done by developers Agile Testing - . an introduction to the issues by richard neeve &lt;date removed to protect client identity&gt;.

Agile Testing with Testing Anywhere - . the road to automation need not be long. agenda. what is agile testing?

Know Before You Go Part II - . www.udel.edu/global. pre-departure orientation. travel abroad can be complicated – there

Intro to Psychological Testing (part II) - . clinical judgment. do clinicians have special powers of intuition? can

What is Agile Testing? - To understand what is agile testing, it is imperative to understand the basics of agile

Testing with Android Part I of II - . android testing framework. based on junit the android junit extensions provide