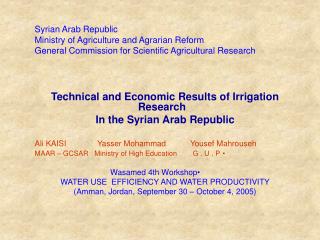 AGRARIAN REFORM - . objective. to understand the socio-political issues/concerns behind agrarian reform to appreciate the

The Agrarian Republic - . chapter 9: out of many. today’s learning targets. #2: outline the communities on the pacific

Ministry of Agriculture of the Republic of Tajikistan - . « development of the agriculture sector and food security of