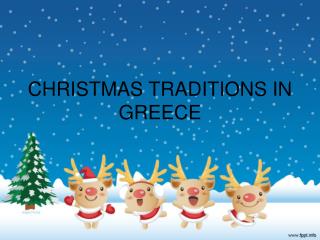 CHRISTMAS TRADITIONS IN GREECE. In Greece when we talk about the "holidays" we are referring to the holiday period of Christmas, New Year and Epiphany.

How the Grinch Stole Christmas by Dr. Suess - . the character of the grinch is based on the protagonist of “a christmas

in PORTUGAL - . christmas tradition. christmas is …. the religious celebration of the birth of jesus christ. peace,

Ancient Greece - . learning goal. we will describe the geography of ancient greece and understand the influence of water

Ancient Greece - . early civilizations in greece. the parthenon. i. geography. mountains divided greece and led to

Christmas Table Quiz - . © www.seomraranga.com. round 1. question 1: which gift, brought by the three wise men, had the