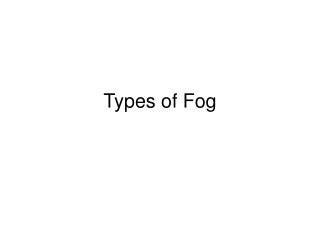 Types of Fog. Radiation fog generally forms when the air near the surface cools to its saturation temperature due to radiational cooling at night when the sun has set. FOG - . fog is a cloud (usually stratus) that is in contact with the ground. relatively stable air ie. shallow lapse rate

The Fog of War - . tactical battlefield picture not integrated inefficient. from concepts to capabilities. common

UTILITY FOG - . presented by: anju kumari reg.no.0501222114 branch-ece. introduction. nanotechnology is the use of