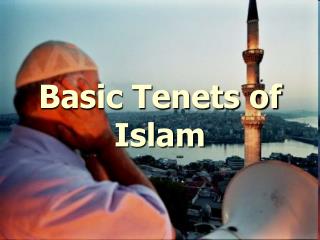 Basic Tenets of Islam. What is Islam and how is it related to Judaism and Christianity?. Islam = “peace,” “submission” Muslim = “submitter” Abraham’s two sons: Isaac  the Hebrews (Judaism  Christianity) Ishmael  the Arabs (Islam) Tenets of Islam “added details” - . dr. maggio gls-220. five pillars of islam. one god, allah, and mohammad is his

Basic tenets of Ayurveda - Ayurveda is a way to lead a healthy and happy life. it is believed in ayurveda that a

Christianity Basic Tenets - . the rise of christianity. romans conquered palestine in 63 bc. *jews were tolerated and

Basic Facts of Islam - . islam is the third in succession of the three great monotheistic faiths born in the middle east

Basic Teachings of Islam - . salah – prayer. leeds makkah masjid www.makkahmasjid.co.uk. how to perform salah. in the

Basic Teachings of Islam - Purity and cleanliness . a person must have purity and be clean before worshiping god almight.

Basic Facts of Islam - . islam is the third in succession of the three great monotheistic faiths born in the middle