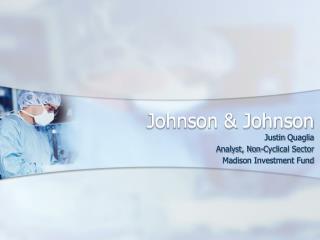 Johnson & Johnson . Justin Quaglia Analyst, Non-Cyclical Sector Madison Investment Fund. Objective. A stable and strong company that meets all the needs of a stock an investor should have going into a recession Blood pressure. “This may be the most important number we encounter during our day.” – Dr Mark Johnson - . august

Moving the Next Generation Science Standards to the Classroom - . ksta pre-conference october 31, 2013 facilitated by