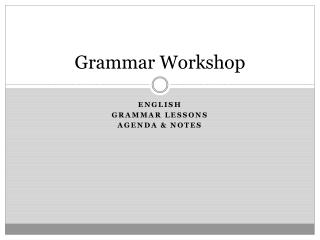 Grammar Workshop - . the writing studio bate 2005. pronoun and antecedent agreement. a pronoun is a word that takes the

Teaching Grammar and Mechanics in Writing Workshop - . grammar vs. mechanics. grammar includes principles that guide the