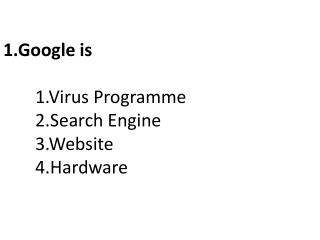 1.Google is 1.Virus Programme 2.Search Engine 3.Website 4.Hardware. Ans :-Search Engine. 2.where are programs and data to be used by the computer available? 1 Output 2 Processing unit 3 Input 4 Storage. Ans :-Storage. 3.A parallel port is most often used by a – Google and Search Engine Success - . how to rank well organically, locally, and with obituaries. selected independent

SEARCH ENGINE (1) - . what is a search engine? a program that indexes documents, then attempts to match documents

IS YOUR WEBSITE SPEED HURTING YOUR SEARCH ENGINE OPTIMIZATION? - You’ve been there right? you’ve typed in the url you

How Search Engine Index a website - The first basic truths, that’s you need to understand in seo that search engines

Using a Google Custom Search Engine (CSE) - . sally kuhlenschmidt january 9, 2009. in this session you will: . explore

What is Search Engine Optimization? - Seo (search engine optimization) is the process of managing content that can be

What is Search Engine Marketing? - Search engine optimisation is nothing other than a load of work that is conducted on