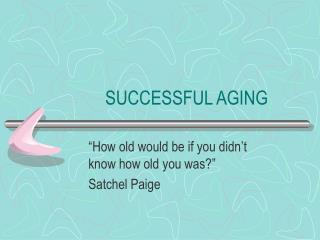 SUCCESSFUL AGING. “How old would be if you didn’t know how old you was?” Satchel Paige. Successful Aging: What Is It?. “…our concept of success connotes more than a happy outcome; it implies achievement rather than mere good luck”. Rowe & Kahn (p.37). Successful aging: Anti-Aging and skin care tips and treatment - Most of people are facing aging problem. here are some tips that will be

Caregiver Consultant Refresher Training - . 2013. minnesota board on aging and minnesota area agencies on aging. this

HLTEN 515A - . deliver nursing care to older clients. session one introduction to the unit and subject overview &amp;

AGING AND EXERCISE - . major questions. w what is the effect of aging and training on body composition?. w how are