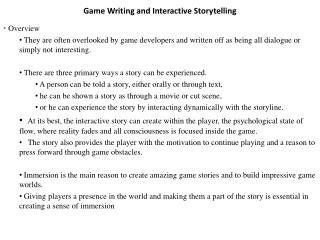 Game Writing and Interactive Storytelling. Overview They are often overlooked by game developers and written off as being all dialogue or simply not interesting. There are three primary ways a story can be experienced. A person can be told a story, either orally or through text, STORYTELLING AND WRITING FOR BROADCAST - . “the heart of what we do is writing. we have pictures, but they don’t

Interactive Quiz Game - . select the correct answer of each number. click the letter that best answer to the questions

Interactive Media and Game Development - . frontiers 2008 mark claypool. what do you think goes into developing games?.

Interactive Media and Game Development - . tiles, sprites and concept art. tiles. a tile is a small, square 2d image for