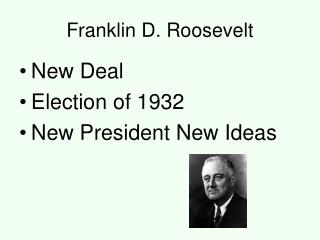 Franklin D. Roosevelt. New Deal Election of 1932 New President New Ideas. What comparison are they making about Obama and Why? Do you feel confident in the new leadership?. PROMPT. How did the New Deal Respond to the problems of the depression and change the role of the federal government?. 20 th C entury TIME AND PLACE - . there where many political leaders during this time. there where adolf hitler of

Analyze the impact Franklin D. Roosevelt had on the American people after becoming President. - Objectives. analyze the