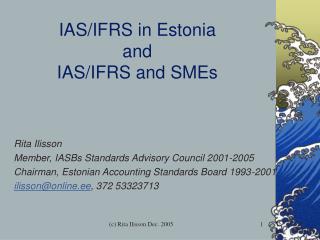 IFRS for SMEs Business Combination and Consolidated and separate financial statements - . scope of the standard. business

IFRS for SMEs - . sections 26, 27 and 28 similarities and differences of full ifrs and ifrs for smes. antonio caronan co

The IFRS for SMEs - . topic 1.2 overview of the ifrs for smes review of all sections of the standard highlight key

IAS 17 - Leases - . executive summary. overall accounting for leases under ifrs and us gaap is similar, although ifrs has

IAS 27 - Consolidations - . executive summary. ifrs and us gaap are fairly well converged with respect to business

IAS 37 - Contingencies - . executive summary. both ifrs and us gaap have similar recognition criteria for a liability.