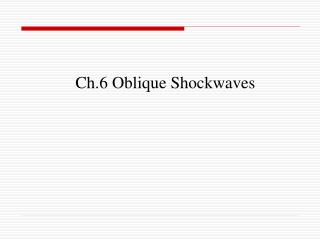 Ch.6 Oblique Shockwaves. 6.1 Introduction. 1. Definition of Oblique Shock - a straight compression shock wave inclined at an angle to the upstream flow direction - In general, the oblique shocks produce a change in flow direction as indicated in Fig. 6.1. 2. Occurrence 1] external flow Oblique Triangles - . oblique triangle – a non-right triangle. it may be acute. it may be obtuse. all triangles have

Ch 6 - Thermal energy. ch 6. sec 1 temperature and heat. as you will find out in ps1, all matter is made up of tiny

Ch 6 - . why is “ being in a group of six boys ” dangerous? how did rap and a stranger save the boys in this