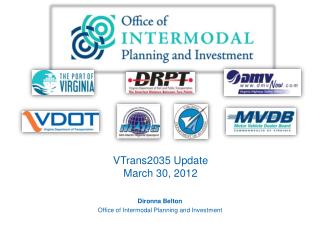 011 Dironna Belton Office of Intermodal Planning and Investment. What is VTrans?. Code of Virginia -- § 33.1-23.03 Requires CTB to develop a statewide multimodal long-range plan. 8 financial indicators to consider before investing - Investment has never been so easy. every investment strategy

US Dept. of Housing and Urban Development Office of Community Planning and Development - . neighborhood stabilization

Planning - Chapter 11.1-11.3 some material adopted from notes by andreas geyer-schulz and chuck dyer overview what is