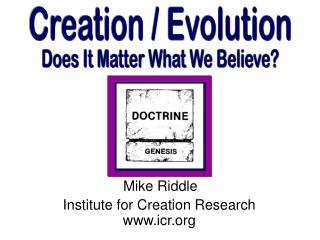 Creation / Evolution. Does It Matter What We Believe?. Mike Riddle. Institute for Creation Research www.icr.org. Topics. Two models of history 7 Biblical truths why it matters Science and why it matters Conclusion: Why it matters what we believe. Sin was the cause of death The Evolution of Management Thought - . chapter two. learning objectives. describe how the need to increase

What Does The Bible Say About Creation? - . dr. heinz lycklama heinz@osta.com www.osta.com/creation. the bible and

AIM - . what is evolution?. evolutionary theory. process of change in species over a long time they are distinctly

Infiltration - . god has always desired a place to dwell with his creation…. creation, commission, counterfeit.