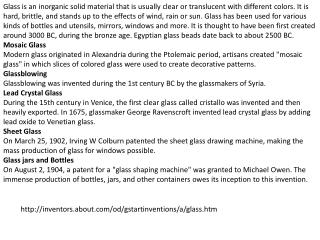 Chapter 14 Glass - . “there is no den in the wide world to hide a rogue. commit a crime and the earth is made of

Glass analysis - . distinguishing glass fragments. glass is a is a hard , amorphous material made by melting sand, lime

Intelligent Glass - . what do you think of when you think of glass ?. gorilla glass thin light damage resistant over 1

Kids Are Inventors, Too by Arlene Erlbach - . 1 which sentence states a main idea from the selection? a. the inventor of

The History of - . the microscope. http://users.adelphia.net/~vtcraig/. a what?!. microscope:. an instrument for

Glass &amp; Soil Review - . what is the state of matter of glass at room temperature?. it is an amorphous solid. the

Glass basins make a glass act in the bathroom - Glass has a beautifully versatile, fluid nature that links it