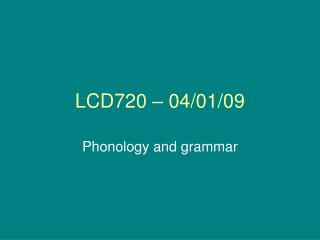 LCD720 – 04/01/09. Phonology and grammar. Announcements. Midterm Grades on Blackboard Reminder 10% of your grade is for participation Final paper Guidelines are on Blackboard Due on May 13 before class Submit on Blackboard (or e-mail) In Word (not pdf). Homework. LCD720 – 04/22/09 - . pronunciation and orthography. announcements. homework look at the lesson plan, and answer the